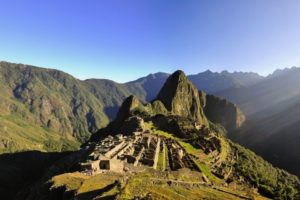 The most popular time to trek to Machu Picchu is between May and September, as the likelihood of encountering rain is low. Trails are, however, busy at this time of the year and avoiding crowds within the Citadel, as well as on the Inca Trail, a challenge.

The wettest months are January and February, and are not great for trekking. The Inca Trail is in fact closed for restoration in February.

The best time to trek to Mach Picchu, if you are trying to avoid crowds and rain, is on the shoulder months of the dry season, April-May and Late September, October and early November.

Temperatures tend to be very moderate and consistent throughout the year, with average highs between 25-28°C and average lows of 7-10°C. During the day the temperatures are usually warm and humid, and in the evening cold and frigid. It can get particularly cold (below zero °C) at night during May through September.

It is important to note that weather is unpredictable in the Andes and there is always a possibility of encountering rain somewhere on the trail, regardless of season. Good waterproof rain gear is a must. Fog, particularly in the early morning, is also common at Machu Picchu so don’t be too disappointed if the citadel is shrouded in mist – it typically clears by the late morning / early afternoon.