The Huchuy Qosqo trek is the shortest and easiest of alternative treks to Machu Picchu.

The route is situated just north of Cusco, making access easy and is ideal for visitors who either don’t have much time in the region or would like to do a little hiking without too much of a strenuous workout.

Most tour companies offer the trek on a two-day schedule, with one-night camping, and an additional night spent in Aguas Calientes before visiting Machu Picchu on day-three.

In this detailed Huchuy Qosqo trek article we provide a brief historical overview on the Inca site, a route itinerary, a short description on the equipment packing list requirements and information on acclimatisation and weather considerations.

At the end of the article we have provided a link to our tour operator recommendation service, should you want us to help you find a reliable tour company for this trek.

A History of Huchuy Qosqo

Huchuy Qosqo (pronounced Oh-chee Cusco), which means ‘Small Cusco’ or ‘Little Cusco’ in Quechua, is an Inca archeological site situated at 3,600m above sea level, north of Cusco and above the town of Lamay (3,000m) in the Sacred Valley (see map below).

It is believed that the site was built during the reign of the eighth Incan Ruler, Viracocha, and originally had the name Kakya Qawani. It was only remained to Huchuy Qosqo in the 20th century.

Like many Inca ruins in the Cusco region, the site was largely demolished during the 1500s. Today one can still see the many terraces that surround the site as well as evidence of a kallanka (great hall) which would have been 40m long, and an Incan irrigation channel that would have supplied natural spring water to the site.

The site can only be reached on foot or horseback, although there is a dirt road that runs from Lamay to a viewpoint which is about 150m from ruins that can be accessed by car.

There are a few route itineraries for the Huchuy Qosco trek. The itinerary set out here is for a typical 3D/2N trek to Machu Picchu that starts from the ruins just north of Cusco, called Tambomachay. 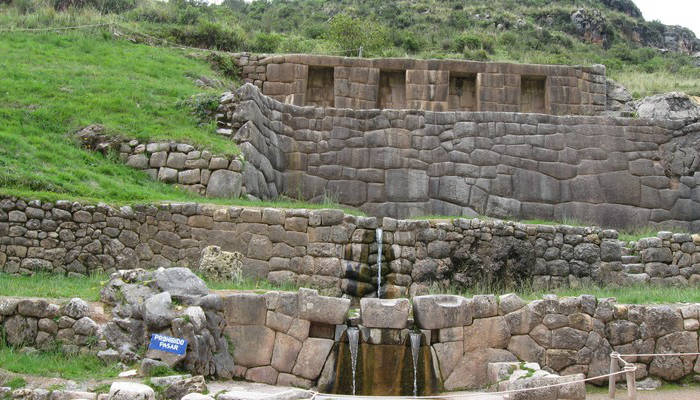 After being picked up early, around 06:00, you will be driven 7km north of Cusco (3,400m) to an Inca ruin called Tambomachy (3,700m). This is the starting point of the Huchuy Qosco trek. After a brief visit to these ruins you will begin trekking up a gradual hill that gets steeper and tougher as you approach the first pass called Sicllaccasa (4,020m). The views of the Sacred Valley and Cusco city are great from the top of this pass.

From here the trail ascends and descends 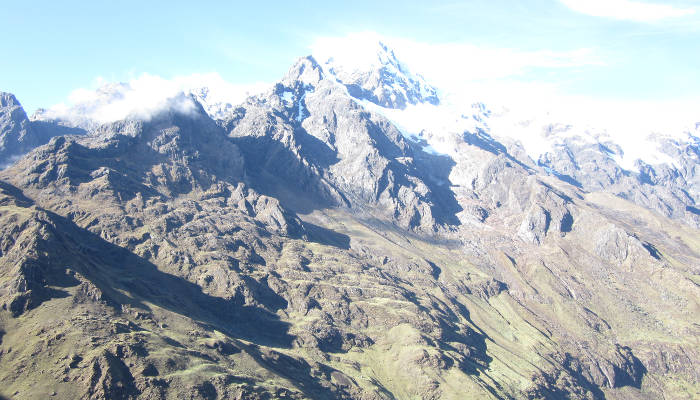 over number of undulating hills (small passes). The first is called Queullococha (4,185m). The views of the snow-capped Cordillera Urubamba along this part of the trail are awesome. Ask your guide to point out the peaks of Veronica, Pitusiray, Chicon and San Juan.

You will then pass by an impressive alpine lake called Queullococha before continuing up to the Challu Challu Pass (4,220m), where you will be afforded great views of the Chinchero plains and the Piuray and Qoricocha lakes below.

The trek continues a little further up to Rumicruz (4,230m) before descending to the homestead of Pucamarca (3,980m), where most trekkers camp for the night.

The total trekking distance is ~13km and takes the average trekker 7-8 hours to complete. 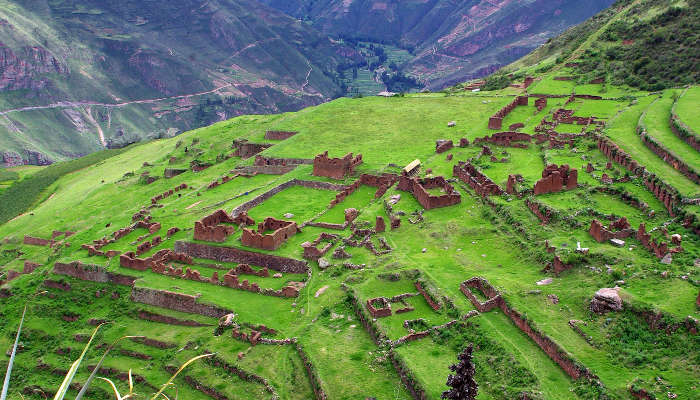 Today is a lot easier than the first day. Youwill have breakfast relatively early and then trek down to the ruins at Huchuy Qosqo (3,600m). The site takes a good hour to explore and most tour operators will provide a guided tour (typically your trekking guide will give you the tour of the ruins).

The most common route departs from the Inca ruins at Tambomachy and goes via the village of Pucamarca, to Huchuy Qosqo (as set out in the itinerary above). From here trekkers either continue on to Lamay and are then transported to Ollantaytambo to catch a train to Aguas Calientes, or trek to Tauqaq where they are transported to another Inca site at Moray before going to Ollantaytambo.

Best time to do a Huchuy Qosqo Trek

There are two main weather seasons in this part of the Peruvian Andes.

A dry season that runs from May through to September, and a wet season that starts in October and runs through to April. The best time for a Huchuy Qosqo trek is during the dry season (May-September). You can however trek to Huchuy Qosqo all-year-round, but we recommend avoiding January and February which are the wettest months. The dry shoulder months of March / April and October / November are pleasant, although there is a higher probability of encountering rain.

Temperatures throughout the year are relatively consistent. The days are warm (in the high 20s Celsius), and the nights and early mornings cold (low digits and sometimes below zero Celsius). Layered trekking clothing is important (see packing list below).

Micro-climates dominate in the Andes, which means weather conditions can change quickly and rain is possible all year round. Do bring wet weather gear, like a poncho, even in the dry season.

Please note: May through September is the peak trekking season, however, as the Huchuy Qosqo trek is one of the least popular routes you are unlikely to encounter many trekkers on the trail. Machu Picchu, on the other hand, will be busy. You should try book your train tickets to Aguas Calientes and entrance tickets to the Citadel as soon as possible (note: these tickets are usually included in your tour package).

We have written a detailed packing list for the Inca Trail which you can use as a template for the Huchuy Qosqo trek. However, as the trek is shorter you will not need as many changes of clothing (i.e. only 2-3 pairs of socks, 2-3 shirts etc.). Also, because trekkers on the Huchuy Qosqo trek only camp for one night, it is more economical to rent a sleeping bag.

Although the Huchuy Qosqo trek has a reputation of being the easiest trekking route to Machu Picchu, it still requires trekking to high altitudes (over 4,000m). This comes with obvious altitude sickness risks.

We recommend you take a moment to read our guidance on acclimatisation and altitude sickness so that you are fully aware of the risks associated with high altitude trekking, and well-informed on best practice safety methods.

If your still have any questions about the Huchuy Qosqo hike, feel free to drop us a note here.